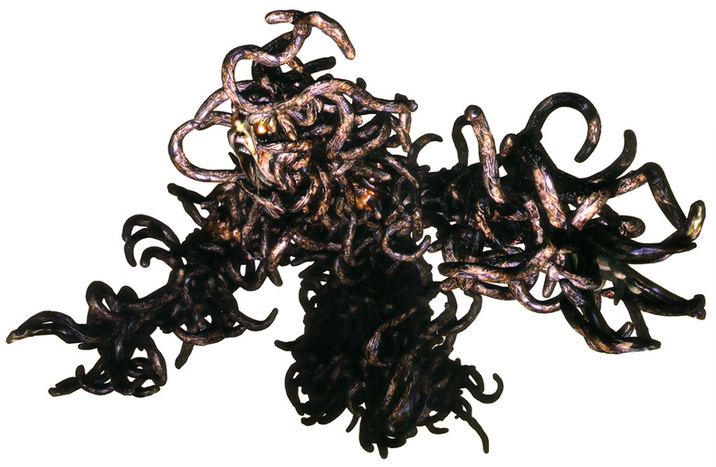 Uroboros Test Subject
The magnum opus of Albert Wesker, the Uroboros Virus is the closest any virus has gotten to unlocking and mastering the potential of Progenitor to achieve immortality.

The Virus was named after Ouroboros (Uroboros is an alternative spelling), a symbol with origins in 14th century BC Egypt. Ouroboros is the symbol’s Greek name (which means “tail food"), and it depicts a serpent devouring its own tail. It represents unity, infinity, and cycles in mysticism. In alchemy, it is linked to the magnum opus and philosopher’s stone, and represents self-perfection through transmutation (accumulating in the formula for immortality). 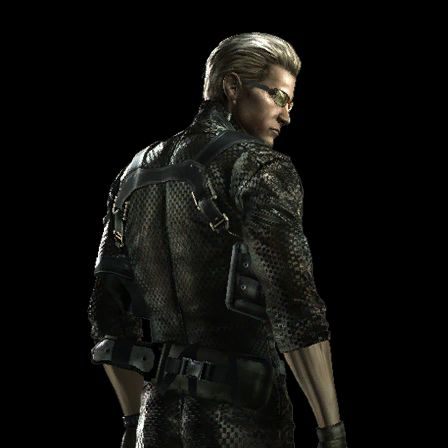 Albert Wesker
The creation of Uroboros was envisioned in 2006, after Wesker determined to usurp Oswell Spencer's ambitions, and development began shortly thereafter with the discovery of the Progenitor Virus by the TRICELL corporation. Wesker's original plans of mass extinction and replacing humanity fused with Spencer's goal of an evolved humanity. Unlike Spencer's plans, Wesker ignored the rejection rates of Progenitor adaption, allowing speedy development (only three years), as anyone not equal to himself had no place in his new world. In fact, no one else might have even survived.

Spencer envisioned a virus identical to Uroboros, except his version would be more forgiving with adaption (after all, he would be infected himself). He sought to achieve this with T, and approved of G for the same reason.

After Wesker was killed by Chris Redfield and Sheva Alomar, the BSAA took down TRICELL and presumably destroyed all samples of Uroboros they could. However, Alex Wesker had a sample of the virus recovered, and she used it in bioweapons experiments. After the death of Alex, Uroboros may now be extinct. 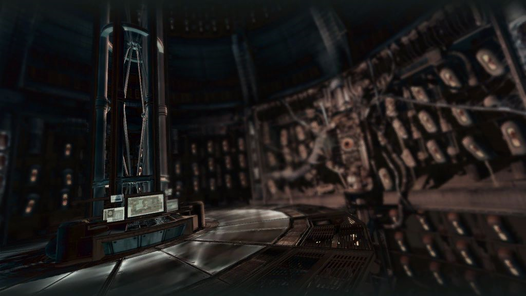 Experimental Facility
Uroboros is the most "pure" of all the Progenitor Viruses. It is less lethal than modern Progenitor, yet still lethal enough to kill billions. It effectively restores the virus' ability to evolve human hosts, something all other viruses have fallen short of. It is also extraordinarily virulent, and if a sufficient quantity of the virus were released into the upper tropopause, all humans living on the entire planet would quickly be infected.

While Uroboros was created directly from Progenitor, t-Veronica and the G-Virus were used as a reference, to achieve what they failed to do. The only known outside agent introduced to the virus was Jill Valentine's t-Virus antibodies, which lessened toxicity just enough to allow hosts like Wesker to survive infection.

The main difference between Progenitor and Uroboros was that the latter eliminated random mutation (at least in human hosts), resulting in two consistent results: adaption and rejection. 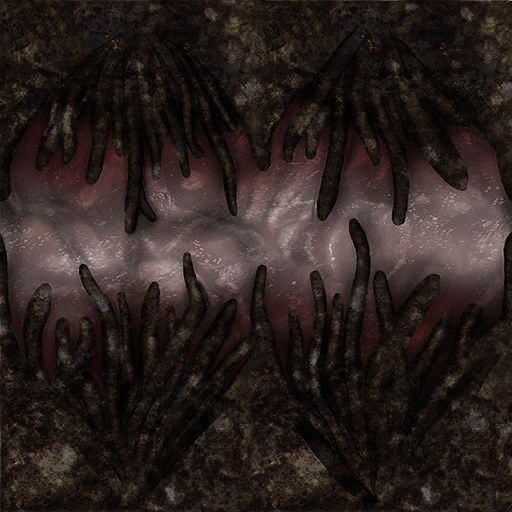 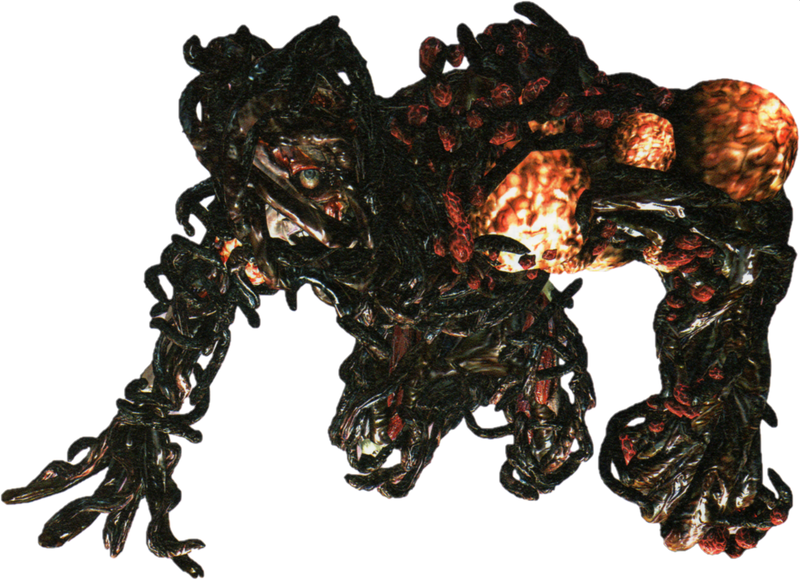 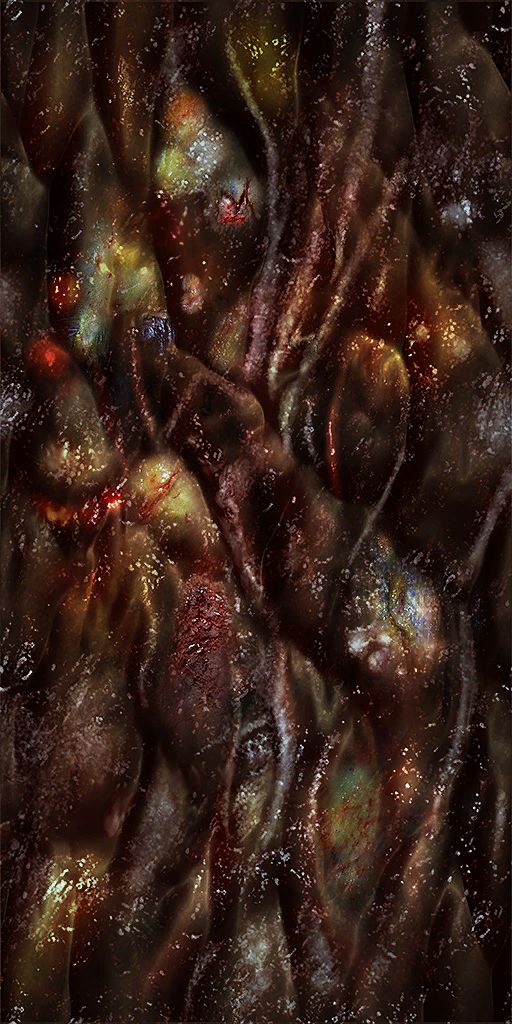 Once Uroboros enters the host, it develops a “core” (a bright orange organ) from which sprouts viral pustules the size of snakes. These pustules feed on organic tissue, and begin devouring the host from the inside out, like the snake devouring its own tail (Ouroboros).

If a host has excellent genes like Albert or the ancient Ndipaya, they are able to metabolize the pustules after they begin growing, and they are completely absorbed into the body. Dosage must be precise, as overdosing can either prevent the pustules from being subdued, or simply prolong the process. 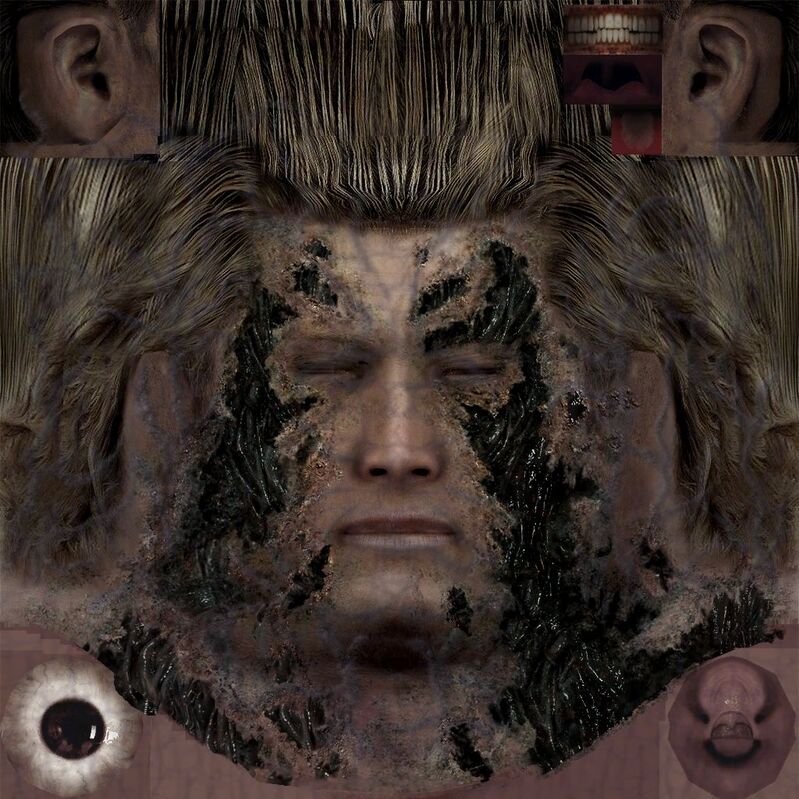 Wesker Uroboros Head Model
After the virus is absorbed by the body, the host becomes a stable super human similar to Progenitor Humans. Uroboros Humans would presumably have abilities equal to Albert Wesker, like enhanced speed and strength, and almost supernatural regenerative capabilities. Unlike Albert, they would also cease aging and require no serum to stabilize the virus. They would be as close as you can get to literal immortals. Whether or not they would be able to breed or acquire enhanced intelligence like Progenitor Humans or Mary Gray is not known (see the “Super Human” section of Virus Analysis: Tyrant for more info). They would have the characteristic eye mutation seen in adapters, and may be able to generate and control pustules at will. 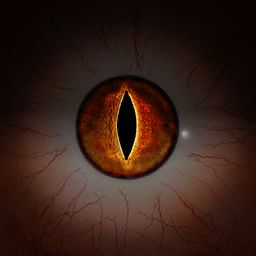 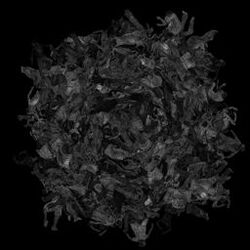 If the host lacks adaptable genes, the pustules will not be suppressed, but will consume the body, leaving the few remnants of the host as a vehicle for the pustules to seek more food. The resulting mass of pustules (simply called “Uroboros”, similar to how t-Virus hosts are called Tyrants, G-Virus hosts are called G, etc.) will continue to feed on both living and dead biomatter, increasing in size, and will possibly merge with other Uroboros masses. These masses are not mutant hosts, but are actually the virus itself, growing and spreading. Uroboros is incapable of random mutations in human hosts.
These creatures have very limited intelligence, but operate in tandem when connected to a single core, which acts as a brain and source of activity. Some will develop multiple cores. The body of an Uroboros can dismantle in order to transverse small cracks.

Individual pustules not attached to a core are of little threat, and will likely die on their own. Larger Uroboros creatures can spawn small independent clumps of pustules capable of distracting or ensnaring prey.
​A host who has partially adaptable genes will begin to become an Uroboros Human, but will quickly degenerate into an especially volatile Uroboros creature. One such host was encountered and destroyed by Chris and Sheva. This creature, called “Uroboros Mkono”, had multiple cores and a large limb capable of attacking from a distance. Mkono is Swahili for “arm” (in reference to it's limb).
A Uroboros creature that has absorbed many corpses will grow into a giant, tree-like monster called “Uroboros Aheri”. Excella Gionne, after being infected with Uroboros by Wesker, became one such creature. If the Uroboros Virus was released on the word, the surface of the planet would be covered by Aheri. Aheri is Swahili for “better” (in reference to it's superiority over Mkono) or for “end” or “limit” (in reference to it being the final stage of the Uroboros lifecycle).

While the results of live infection are supposed to be consistent, several abnormalities exist in three particular hosts.

Albert Wesker, as an Uroboros adapter, was able to control the pustules after infection and prevent them from consuming him. However, he overdosed, resulting in a prolonged bonding period. His skin blackened and pustules consumed his arms. These pustules wrapped around shards of metal, which Albert used as dangerous slashing weapons. Had he not been killed in the volcano, he would presumably repress the growths eventually and become an Uroboros Human. 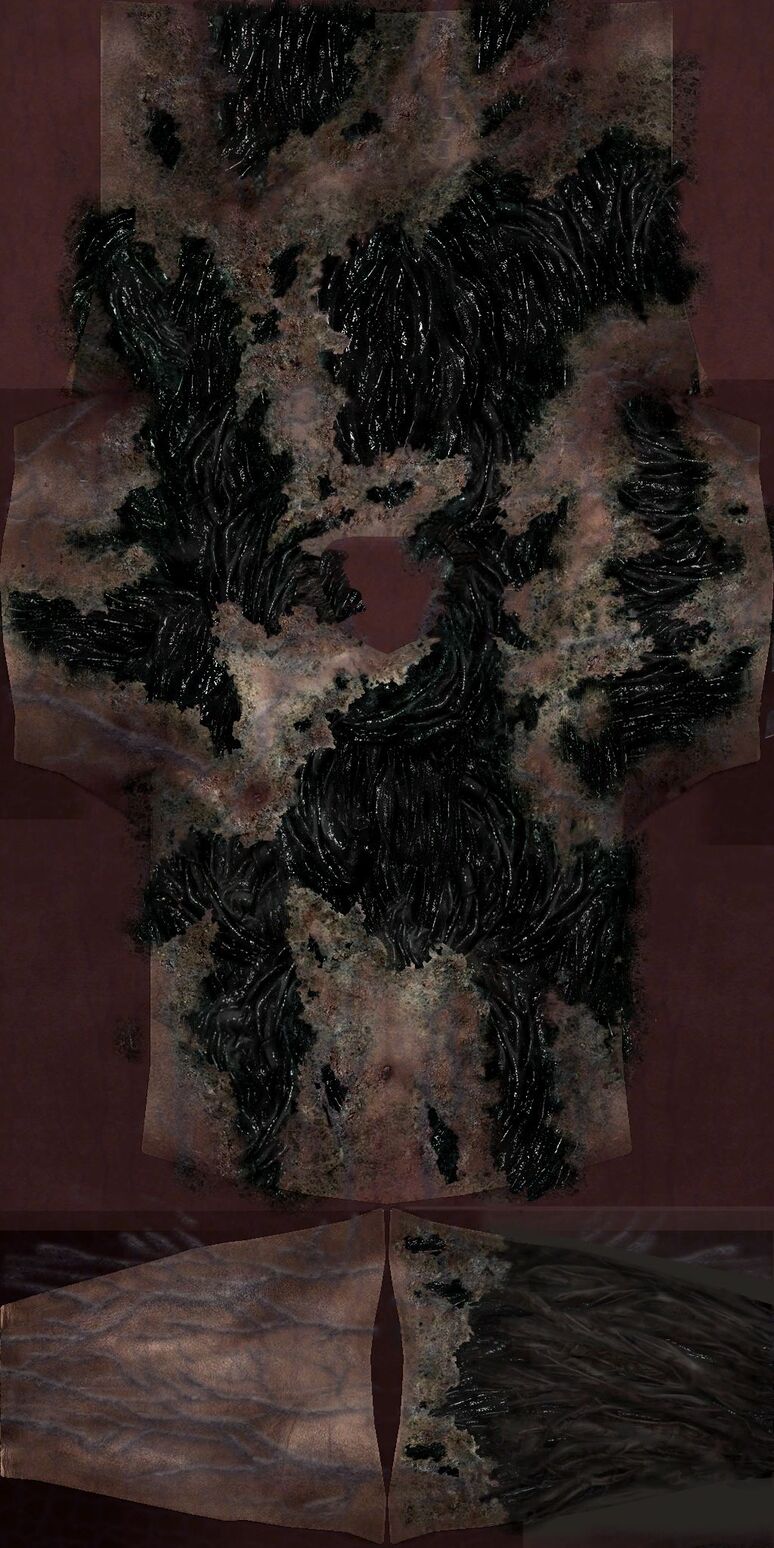 Albert Wesker Body
The peculiarities in Neil and Alex were owing to semi-compatible genes like the Mkono host and a prior infection with t-Phobos. These two are covered more in the t-Phobos Analysis. 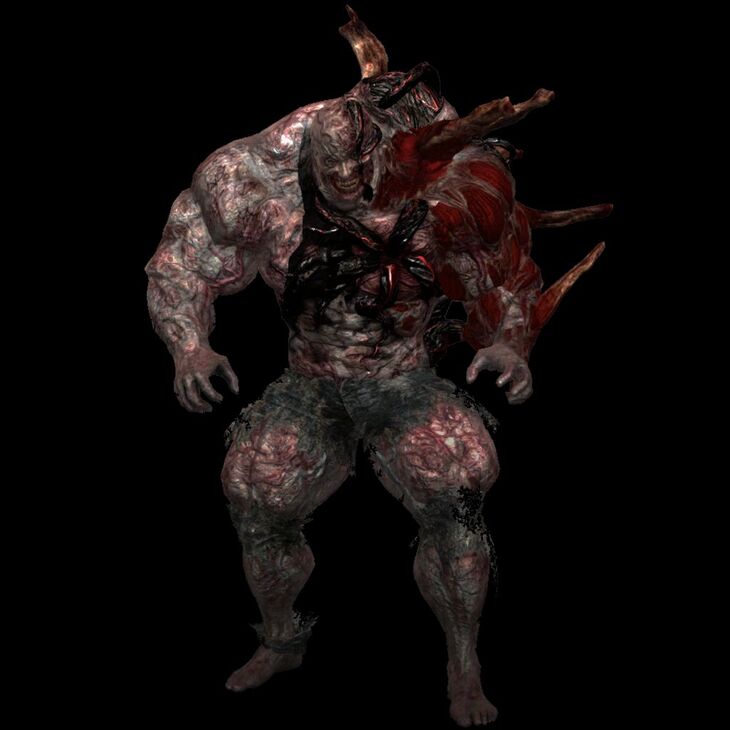 Neil Tyrant
Only one type of irregular mutant created by Uroboros has ever been encountered: the Reapers. Cockroaches are famous for their vitality - it is commonly said they would continue to thrive after a nuclear apocalypse, and can survive decapitation and other such wounds. As such, the vitality these creatures possess have allowed them to mutate favorably from Uroboros. They have not only grown immensely like t-Virus infected arthropods, but after some time in a cocoon, have become entirely new bipedal creatures. This demonstrates the ability of Progenitor to create new life, which has appeared most prominently in G, C, and Uroboros. 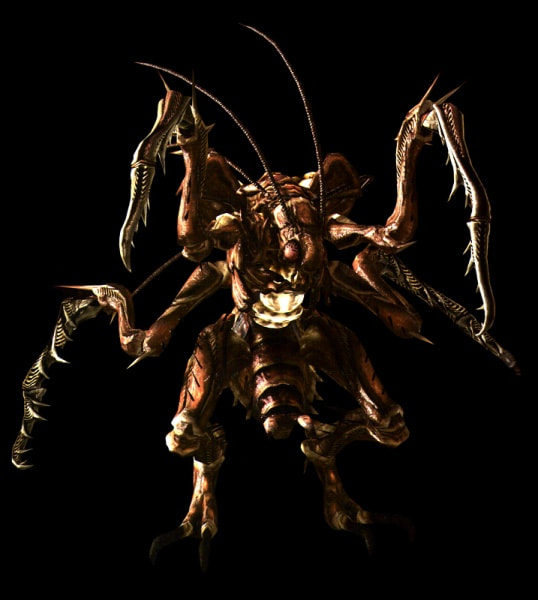 Reaper
Reapers have extreme regenerative abilities thanks to Uroboros, being able to regrow limbs in seconds, but the exposed, core-like organs they have serve as weak points. They expel a gas capable of blinding prey. They are named for their scythe-like blades.

Like G, injection of Uroboros into deceased hosts results in rudimentary animation, resulting in the creation of Revenants. Like live host infection, infection begins with the development of a core. However, a lack of living tissue prevents the development of new biomatter (aka pustules). Instead, organic matter surrounding the core is repaired and "converted" into Uroboros tissue, becoming black and sticky, underneath the dead skin. When the skin is peeled away, Revenants are revealed to simply be human shaped pustule masses unable to generate new material and spread. Like live hosts, destroying the core is the only means of destroying Revenants.
Alex Wesker created an army of Revenants to hunt down Natalia Korda. The limbs of multiple humans were stitched and assembled, and the nature of Uroboros in organic material allowed them to fuse and operate in tandem. Metallic parts were stitched in as well to function as weapons. They greatly resembled marionettes, and were named after a type of undead spirit.
Splashers are Revenants with large, pus filled sacs for arms (with vestigial hands). They splash this pus at targets to obscure vision. These sacs are either related to Uroboros cores, the slime mold cysts seen on Afflicted, or limbs mutated by t-Phobos (the charred remains of Gabe had an identically shaped arm). The latter two explanations would be due to the fact the parts Alex used were from previous experiments. 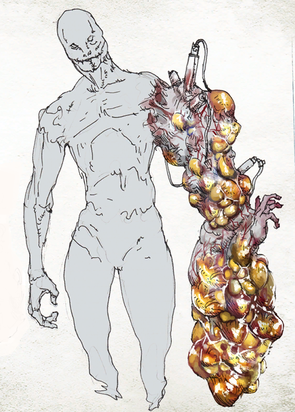 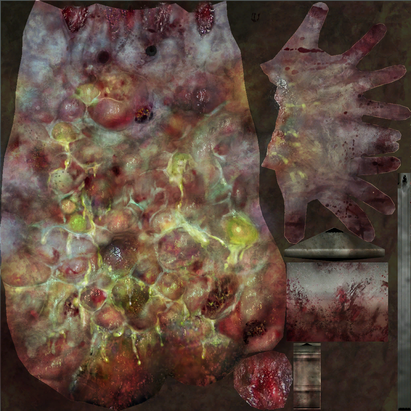 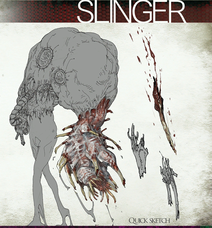 Slingers are comprised of legs attached to a horribly misshapen torso (if it can even be called that). The core is located on the chest, while the right arm is a boney stub. The left arm is a disfigured, parasite-like body the Slinger slings at prey, which explodes on impact. Using Uroboros' regenerative potential, it can then regrow this "arm".