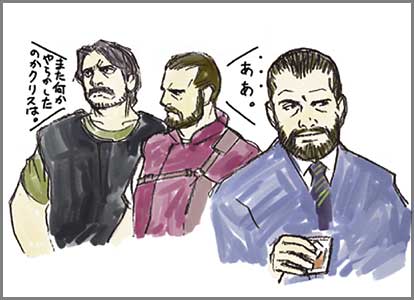 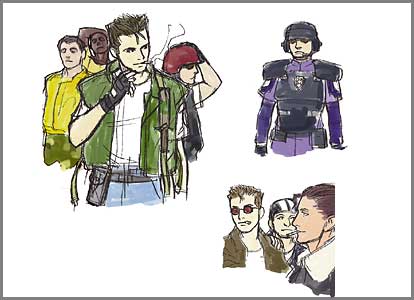 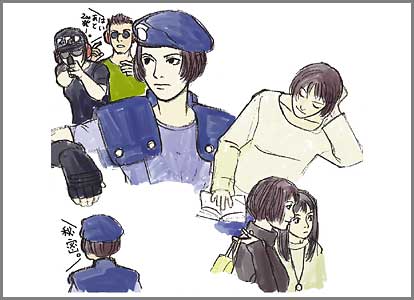 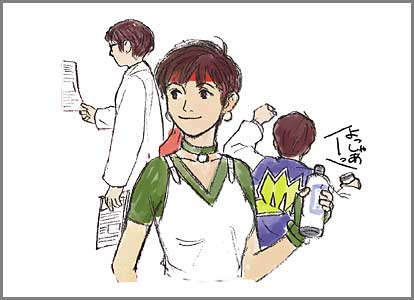 B: Since CFC received two sheets of pages, we'll introduce the settings of the BIO1 characters that haven't been officially announced very much. (Pictures-Sentences / Oishi)

C: CHRIS REDFIELD
He's a little lacking in the sense of cooperation required among other special ops units like SWAT. Although he acts under his own authority a lot, he has also solved many cases, so for the moment his degree of punishment is being lectured by Wesker.

D: The members of STARS differ in equipment per individual. Although properly speaking all members should wear this stuff, their reasons vary. By the way, when you take away this equipment's protector, it becomes Leon's attire in BIO2.

E: On holidays they go to the suburbs, cause a ruckus and come home. Left is Chris, Joseph middle and Forest right.

F: REBECCA CHAMBERS
The rookie of B-Team. An eccentric person whose talents were valued by chemical companies that scouted her one after another (including Umbrella), but she declined all of them and joined STARS. (Left is Rebecca in her school days.) On holidays she goes to watch basketball games with friends.

G: Chief Brian is the most unpopular person with the Raccoon Police Department. Sees above-mentioned trio as enemies.

I: ENRICO MARINI
Enrico is Barry's good confidant. He also serves as Vice-Captain of STARS and Captain of B-Team.

J: BARRY BURTON
The man who enlisted Chris into STARS. Whenever Chris does something, Brian complains to him every time.

N: Chris trains her in marksmanship several times a week. Since Jill gets angry if he doesn't teach her well, Chris teaches her very seriously.
O: "Alright, 200 more shots."

P: JILL VALENTINE
Attached to A-Team. Lock-picking is her specialty but it's a mystery where and how she learned her techniques. When Chris asked her once she merely gave a dismissive answer.

Q: "It's a secret."
R: Guiding the child of a relative from Japan around Raccoon City.
S: She often takes it easy at home on holidays and doesn't go out much.