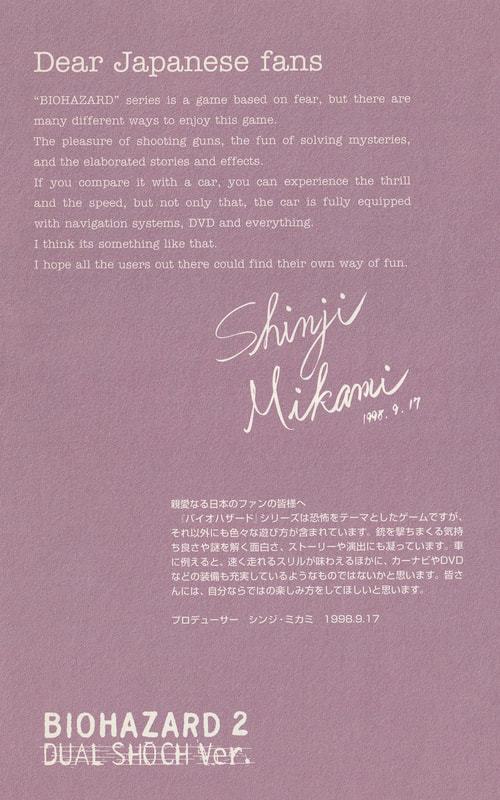 STORY
July 1998, Raccoon City located in the midwest of the United States. Raccoon City is under the auspices of the international corporation Umbrella Pharmaceuticals, and for several months there have been a number of mysterious and bizarre incidents. Groups of people in the area had been attacked and eaten alive. One after another, hikers were found dead in the Arklay Mountains on the outskirts of Raccoon, and the citizens became increasingly worried. Taking the situation seriously, the Raccoon Police Department deployed a specialized unit, S.T.A.R.S. (Special Tactics and Rescue Service), to investigate the incident. When B-Team went to the Arklay Mountains however, contact was lost, and the A-Team sent looking for the B-Team were attacked by monsters in the Raccoon forest area and holed up in a nearby mansion. However, this building was the Umbrella Corporation's secret research facility for biological weapons. The perpetrators of the bizarre incident were researchers who'd been turned into monsters as a result of an outbreak of the T-Virus used in the research. A-Team members Chris Redfield and Jill Valentine, despite losing many of their colleagues, blew up the facility and stopped the madness before it started. However, the truth of the incident was never disclosed to the public in Raccoon City, where Umbrella Corp. had a stranglehold...

Two months later, a student comes to Raccoon City at dusk. She is Claire Redfield, the younger sister of S.T.A.R.S. officer Chris. She's come to the city in search of her brother, who she hasn't heard from for several weeks. At the same time, Leon S. Kennedy, a rookie police officer assigned to the Raccoon Police Department, arrives in the city. This is the first time he's ever been to Raccoon City. Before Leon's puzzled eyes, strange figures appear. They were citizens of Raccoon who'd been infected with the T-Virus, just like the monsters in the mansion. Surrounded by countless groups of the dead attacking one by one, escape routes out of the city were cut off. Heading for the police station where they can be safe for now, Leon and Claire join up with others. What has happened to Raccoon City? The night of tragedy has only just begun...
ZOMBIE
Citizens of Raccoon City infected by the leaked T-Virus. They turn into the living dead and attack the living.

ZOMBIE DOG
A police dog of the Raccoon Police Department infected with the T-Virus. Unlike the Zombies, it's agile in its pursuit of prey.

LICKER
A mutated Zombie. It has no eyesight, but uses its abnormally developed hearing to detect its prey, attacking with its long tongue.

GIANT MOTH
A moth that was bred for experimental purposes, but grew to a huge size under the influence of scientific chemicals. It scatters a poisonous powder.

IVY
A plant-based bioweapon researched and developed by Umbrella Corp. It can walk slowly.

CROW
It was secondarily infected by a virus that it picked up from the flesh of dead victims. It has become increasingly rabid.

LARGE ROACH
A cockroach that has grown to a huge size under the virus' influence. They live in the sewers in swarms and attack intruders.

TYRANT
A further advancement of the T-002 that appeared last time. A cutting-edge soldier of Umbrella who faithfully carries out its mission.

G MONSTER
"G", a virus that causes the DNA of infected organisms to evolve abnormally. The genius scientist William ironically became its test subject, transforming into an immortal monster. Each time he's damaged, his body regenerates at an alarming rate, and the G monster repeatedly evolves in a twisted manner to gain even more power. No one can stop this uncontrollable torrent of power...
CAST
LEON S. KENNEDY
A rookie police officer with a strong sense of justice who became interested in the bizarre incidents occurring in and around Raccoon City and volunteered to be assigned to the Raccoon Police Department. 21-years-old and lacking in practical experience, he more than makes up for it with his energy. He's skilled with firearms and can use a large pistol with ease. On the other hand, perhaps because of his inexperience, or perhaps because his youthful appearance isn't trustworthy, but despite his position as a police officer, Claire, Sherry, and Ada do not listen to him.
Leon's sense of responsibility gets the better of him when he's left to his own devices, and although he occasionally complains about them, he's sincere to women. When he transferred from his hometown, he broke up with his girlfriend after a big fight and got drunk at a motel along the way, ending up very late on his first day.
During the course of the incident, he falls in love with Ada, with whom he walks the same path, but their love ends in a sad and tragic manner.

CLAIRE REDFIELD
A spirited 19-year-old college student who loves motorcycles, she came to Raccoon City on her own, fearing for her brother Chris, a member of S.T.A.R.S. who she hadn't heard from in two months. Leon rescued her from a monster attack, and together they explored the city in search of survivors.
She seems to have been greatly influenced by Chris, with a large survival knife attached to her shoulder and a matching jacket to his with "Made in Heaven" printed on the back. She's very good with her hands as she's used to tinkering with motorcycles, and she can easily unlock simple locks using a lockpick he carries. Chris must've taught her these skills and how to use weapons.
She's a daredevil with a headstrong personality. She never relies on others for her decisions, which often annoys Leon. However, Claire's maternal instincts are aroused by Sherry, a girl she meets in Raccoon City, and she desperately tries to protect her no matter how difficult the situation.

ADA WONG
An Asian woman, 24-years-old, who meets Leon in the police station and cooperates with him. She claims to have come to Raccoon in pursuit of her boyfriend John, an Umbrella researcher, but her true identity is that of an agent for a certain organization that's after the G-Virus. Her shooting skills and the way she carries herself confirm that she's a top-notch agent. Though always cool and stubborn, she's attracted to the honest Leon and is unsettled inside.

SHERRY BIRKIN
A 12-year-old girl who is protected by Claire when she's chased by a monster. She's the only daughter of Umbrella researchers Annette and William, but she grew up without the love and affection she needed because her parents were too absorbed in their research. Perhaps because of this, she's very shy and lonely. She's initially wary of Claire but gradually opens up to her. She has a picture of herself with her parents in her chest pendant.

BEN BERTOLUCCI
A skilled freelance reporter. He has been in Raccoon for about a month now, seeking the truth behind the mysterious disappearance of the bizarre murder cases in Raccoon. When he uncovered the shady connection between Umbrella and Raccoon Police Chief Irons, he was locked up in jail. In fact, after the incident, he stole a key from a guard and locked himself in a cell to protect himself.

BRIAN IRONS
He's the chief officer of the city police department safeguarding the security of Raccoon citizens. Despite knowing the truth about the T-Virus, he covered up the testimonies of the S.T.A.R.S. officers who survived the last incident from the mansion in Arklay. After this incident, he intentionally sowed confusion amongst his subordinates and left them for dead.

ANNETTE BIRKIN
Sherry's mother. She's a researcher at Umbrella Pharmaceuticals and has been helping her husband, William, with the project to develop the G-Virus. She understands the horror of the virus, but whether out of love for her husband or because of her nature as a scientist, her behavior's a little out of the ordinary. After William becomes a monster, she takes over her husband's research and aims to perfect the G-Virus.

WILLIAM BIRKIN
The mad genius scientist who created the T-Virus and G-Virus. He was determined to complete his research even at the cost of everything. He's the one who caused the current tragedy. He was a patron of Umbrella Corp., but due to his excessive ambition, he was betrayed and shot to death by Umbrella's special forces. At the end of his life, however, he injects the G-Virus into his own body and becomes a G monster.

MARVIN
Leon's senior officer in the Raccoon Police Department. While the police station was attacked by the monsters and many officers fell, he's the only one to survive despite being fatally wounded. From the few words exchanged with him during the game, it seems he was usually a friendly and humorous person. After telling Leon and Claire about the incident, he handed them a card key to the police station, hoping for the best.

ROBERT KENDO
He's a 40-year-old Japanese American who runs a gun store called KENDO. His nickname's Bob. He was a good friend of Barry, a S.T.A.R.S. officer whose hobby is collecting firearms, and they used to go fishing together on their days off. After the city was wiped out, he couldn't leave his store and hid behind the counter, but when he tried to harbor Leon etc., he was attacked by a group of Zombies and lost his life.

HUNK
One of Umbrella Corp.'s special agents. HUNK and his team are a professional combat unit willing to kill to achieve their objectives, and their mission this time is to retrieve the G-Virus from Dr. William. However, although they successfully recovered the virus, the doctor turned into a G monster and annihilated the unit. The only survivor, HUNK, attempts to escape to complete his mission...