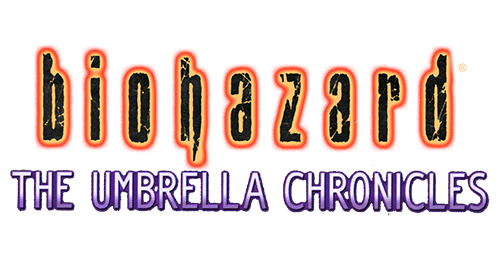 BIOHAZARD UMBRELLA CHRONICLES (Resident Evil The Umbrella Chronicles) was the first game to be specifically designed  for the Nintendo Wii. Umbrella Chronicles departs from previous Gun Survivor games by being an on-the-rails shooter, much akin to the House of the Dead series. The game rehashes many locations from previous games, using characters and locations from the series's main games (excluding Resident Evil 2 and Code: Veronica) New story elements are added as well as new scenario's detailing the end of Umbrella.
Production Information

The plot of the main levels contained in Umbrella Chronicles is roughly the same to that of the game it represents. For the events of Resident Evil Zero, Resident Evil, and Resident Evil 3, they are shortened and in 3's case completely altered to suit an on-the-rails game. Files from the games are placed in the levels so that new players are up to speed on the general plot from each of those games. The new storylines emerge from the entirely new Russian scenario entitled, Umbrella's End which see's the final demise of Umbrella previously mentioned in the opening sequence of Resident Evil 4. Set in February 2003, Chris Redfield and Jill Valentine have joined a regional biohazard containment unit to destroy a new, rumored B.O.W created by Umbrella as a last stand. With a division of the organization, the pair lead a full scale assault on the remaining Umbrella stronghold in Russia.

Umbrella Chronicles is made up of four levels spanning four different locations. Each level is divided into three chapters, with many bonus chapters as well.

The game was initially shown in a compilation of upcoming Wii titles. The short extract showed the dining room of the famous mansion in the first person perspective. Interestingly the extract also showed destructible doors although this feature was not followed through in the final product.

Umbrella Chronicles is made up of four levels spanning four different locations. Each level is divided into three chapters, with many bonus chapters as well.

Train Derailment
The first chapter of Umbrella Chronicles is the retelling of Rebecca Chambers and Billy Coen story on 23 July 1998. Despite the title of the chapter, only the first level is actually set on the doomed Ecliptic Express. The second and third level take place in the Management Training Facility and Arklay Treatment Plant respectively.

Aside from this being a stripped down Resident Evil Zero experience, some aspects have been tweaked. The most notable being the alteration to the Queen Leech and her appearance. The young James Marcus was replaced with a more humanoid leech creature that resembled the much older Dr Marcus rather than the 20 year old researcher.

Mansion Incident
As the title suggests this the retelling of what became known as the mansion incident of Resident Evil. As before this is a lighter version of events that occurred with the S.T.A.R.S. Alpha Team.

The first level occurs in the mansion itself, the second in the courtyard and garden areas and the third in the laboratory. The Mansion Incident uses the layout from the remake of Resident Evil.

Raccoon's Destruction
Raccoon's Destruction is an alternate take of Jill's last escape. Essentially this is the re-telling of Resident Evil 3: Nemesis, however the chapter uses the textures and locations from the Outbreak series. Accordingly, as Outbreak does not cover every area seen in Nemesis, Jill's escape takes her to locations she never canonically visited.

The first level for example takes place on the city streets itself, including locations like Main Street from Outbreak. Level 2 is more of a re-telling of the Underbelly scenario as it takes place in the metro network of Raccoon City. The final level occurs in and around the R.P.D accumulating with a rooftop battle with the mutated Nemesis-T Type.

Umbrella's End
The only completely new 3 level chapter in Umbrella Chronicles. Umbrella's End details the end of Umbrella Corp. as a major entity in the world. Many of the previous levels and the bonus chapters lead up to the moment when Chris Redfield and Jill Valentine lead an anti-biohazard group to a remote Russian chemical plant. The pair arrive via helicopter to see escaped Hunter Delta B.O.W.s roaming the snowy wilderness. The team infiltrate the plant to see that the entire facility now infected with the t-virus.

The Chemical Plant had become the last stronghold of Umbrella with the leader of the U.B.C.S, Sergei Vladimir storing various B.O.W.S in the facility ready to be sold to rouge states for terrorist activities. The facility also housed Umbrella last "ace-in-the-hole", the T-A.L.O.S. prototype. A new breed of Tyrant that was able to be synced to the Red Queen A.I computer network.

Beginnings
Beginnings is the first chapter that allows players to take control of series villain, Albert Wesker. Taking place during the latter stages of Resident Evil Zero, Wesker seeks to place his plan into action by escaping from the Marshalling Yard and the Training Facility before the self destruct sequence destroys the facility.

Nightmare
Nightmare is a follow up chapter for Rebecca Chambers after the events in Resident Evil Zero. Taking refuge in guardhouse of the Mansion, Rebecca experiences a nightmare involving Yawn. After waking up she, along with fellow Bravo Team member, Richard Aiken battles through the mansion before encountering the giant snake. After a devastating battle in the library, Richard is poisoned by the venomous serpent whilst they wait for help.
During the mission, Rebecca Chambers also witnesses Sergei Vladimir and an Ivan B.O.W. leave the mansion carrying the body that will later be used for T-A.L.O.S.

Rebirth
Player's once again take control of renegade operative Albert Wesker after he had been impaled by the Tyrant (T-002 Type). After injecting himself with the experimental virus, Wesker is revived certain that his plan would end in success. Unfortunately, he quickly discovers that his access to the Umbrella computer network has been revoked by Sergei Vladimir. Needing to make a quick escape, Wesker battles through the mansion encountering Lisa Trevor along the way.
Wesker is able to escape from the mansion just in time before the self destruct system is detonated.

4th Survivor
This is a retelling of HUNK escape from Raccoon City after his procurement of the G-virus sample. Starting in the sewer network HUNK must get to the roof of the R.P.D. to enable his rescue.

Death's Door
Death's Door takes place on October 1, 1998 with Ada Wong attempting to escape the city before its destruction. Under the command of Albert Wesker, she is fully aware that her emotional attachment to Leon S. Kennedy would mean she would be expendable. Fortunately for her Ada had managed to acquire a G-virus sample. Using this sample, Wesker provides her with the tools she needs to escape the city.

Dark Legacy
The final chapter in Umbrella Chronicles sees players take control of Albert Wesker as he infiltrates the Caucasus Research Facility in order to obtain all of Umbrella's stored information via the Red Queen computer A.I.

Dark Legacy shows the complete story of Umbrella's End, and see's Wesker battle both Ivan B.O.W.s as well as the mutated form of Sergei Vladimir. Wesker is able to overcome these obstacles and acquire the Red Queen database that he had intended to obtain.

The majority of The Umbrella Chronicles is non-canon as it is predominantly a retelling of events from other games. These are watered-down simplistic versions of what occurred in Resident Evil, Resident Evil Zero and Resident Evil 3: Nemesis and as such what we see in these scenarios cannot be considered canon. This includes aspects that make more sense this time around such as the appearance of the Queen Leech.

However the new elements in this game can be considered canon. This includes all the new story line chapters which add to the overall timeline. It should be noted however, that these new chapters are generally intended to match up with the non-canon retellings therefore complicating their position in the timeline.