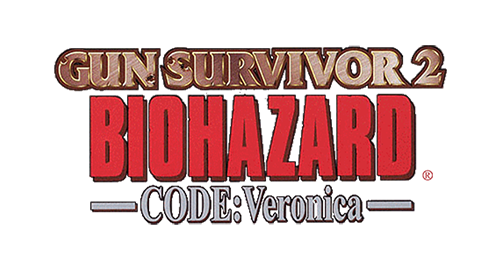 The game was eventually ported to the PlayStation 2 but was only released in JPN and PAL regions. GS2 is a first person shooter based on BIOHAZARD CODE:Veronica. Instead of a linear on the rails experience like House of the Dead, the game allowed players to freely control their character.1
Production Information

After surviving the incidents caused by Albert Wesker and Alexia Ashford on December 28, 1998, Claire Redfield and her brother Chris Redfield are safely piloting a two-seater V-TOL Harrier aircraft, when Claire begins to fall asleep. Her ordeal is finally catching up with her as she drifts into a deep sleep. To her surprise, Claire finds herself back on Rockfort Island re-living the horror of the previous day. The nightmare has just begun.

`Originally announced in early 2001 as BIOHAZARD FIRE ZONE2, the game was developed as the series' first foray into the arcades, based on the setting of BIOHAZARD CODE:Veronica with Claire Redfield and Steve Burnside as the main characters once again. It was a joint venture between CAPCOM and NAMCO using the latter's Naomi board technology, a modified version of the SEGA Dreamcast hardware, and based on an enhanced Quake II engine. The arcade machine used for the game was based on NAMCO's earlier 1998 arcade game, Gunmen Wars. Actual development was handled by Nextech Co., Ltd, the development company of BIOHAZARD CODE:Veronica.

A beta test for the game was held in the CAPCOM Plaza in Kichijoji, Tokyo on February 3-4, 2001 and attended by some gaming press, including GameSpot. 3 It was later featured at the AOU Amusement Expo 2001 on February 23-24, 2001 at the Makuhari Messe outside Tokyo. Before the release of the game, on April 20, 2001 it was renamed as GUN SURVIVOR 2 BIOHAZARD:CODE Veronica4 as part of an internal decision to make the GUN SURVIVOR name into a sub-series of its own.
The game was eventually released to the arcades but failed to make the desired impact and generate sufficient revenue. A PlayStation 2 version was announced later in the year promising extra features as well as full support for NAMCO's GunCon2 peripheral. The PlayStation 2 version was developed by CODE:Veronica developers Nextech (now Nex Entertainment)5 and released in Japan on November 8, 2001, with the PAL release coming on February 8, 2002 to Europe and Australia. It was claimed that the lack of a release of an NTSC version of the game was due to the game's content and use of the GunCon2 being found "inappropriate" by Sony Computer Entertainment America who would not grant it a release in its current state, similar to the situation with BIOHAZARD GUN SURVIVOR which had GunCon2 compatibility removed from NTSC versions of the game. Rather than take this action, the game was simply excluded from an NTSC release.

The "high score ranking" service for the PlayStation 2 version of the game ended on December 22, 2003. 6

Arcade Mode
As the name suggests, this is a faithful port of the game that appeared in the arcades. Like the arcade version, the console version also supported co-operative play allowing for two players at once and marking the first multiplayer BIOHAZARD game. Arcade Mode is split into 5 levels all taking place on Rockfort Island. Level one occurs in the prison area, with the Giant Black Widow acting as the end boss. Level 2 occurs in the palace. Here two Sweeper B.O.W.s are the end bosses. Level 3 predominantly takes place in the military training grounds on the island and the imprisoned Nosferatu is the final boss of the level. The penultimate level is in the private residence with Alexia Ashford being the final boss. Finally the last level is the island airport and the Tyrant (T-103 Mass Produced Type) is the final boss in a burning room. Throughout the entire game, a countdown occurs. If this countdown reaches zero instead of game over as is the case in most arcade games, a Nemesis-T Type is unleashed against Claire Redfield and Steve Burnside. If players collect all 5 jewels that are hidden in each level, after defeating the Tyrant, you get the chance to kill the Nemesis in a special bonus battle.

Dungeon Mode
An all new mode added to the PlayStation 2 version of the game. Players are treated to new locations such as a clock tower and cavern battling B.O.W.s from the BIOHAZARD universe such as the Licker and Drain Deimos from BIOHAZARD 2 and BIOHAZARD 3 LAST ESCAPE respectively.

VS. Roach Mode
A hidden bonus in the game. VS. Roach Mode sees you square off in five intense levels against an army of Large Roach creatures. There is no need for exploration, you are generally in one room, but the mode is fairly fun with the final level including a life threatening laser.

GUN SURVIVOR 2 is a canon entry in the series, and one of the files in the game reveals that it is represented as a dream experienced by Claire while escaping with her brother aboard the Harrier after the events of CODE:Veronica. How she dreams about creatures that she has never encountered remains a mystery. One of the files in the game addressed to Steve from his father reappears in BIOHAZARD THE DARKSIDE CHRONICLES. As a result, this file is also considered canon. The game itself is completely inconsequential to the overall storyline of the series.