• The Beginning
Early July 1998. Unnaturally murdered bodies seemingly eaten by someone were discovered in the Arklay Mountains, the outskirts of Raccoon City in the American Midwest.

• Circumstances (1)
Same Year, July 23. An investigation is started with S.T.A.R.S. by the Raccoon Police Department, taking the situation seriously. S.T.A.R.S. B (Bravo) Team is dispatched but communication is cut-off.

• Circumstances (2)
Same Year, July 24. A (Alpha) Team begins dispatch to search for B Team and we investigated the vicinity for some time, but evacuated to a nearby mansion because we encountered monster dogs.

• Investigation Report (1)
As a result of our investigation in the mansion, the mansion was proven to be a den of Zombies. Other than them, we encountered a large number of traps as well as animals and plants believed to have rearranged genetic information. In addition, we confirmed the deaths of B Team officers.

• Regarding Zombies
Zombies were researchers infected due to the leak of a virus, the "T-Virus", used to create biological weapons. (I submitted a researcher's diary. Please refer to it.)

• Background of Case Handling
Chris Redfield and I blew up the facility to prevent the virus spreading to the town.

• Summary
I believe the destruction of the facility was the optimal method of disposal in that extreme situation. However, Chris Redfield and I have concluded that we'll wait at least 60 days to pass from the time of the virus leak at the site. Therefore we can't help but say that the possibility of the virus leaking into Raccoon City is very high. We will re-investigate the case immediately and think we must urgently appeal to the citizens for caution through the mass media.

PAGE 2
• September 29th, 1998. I moved to Raccoon City. However, the city had a disturbing atmosphere. I encountered Zombies while searching the vicinity. It seems that the T-Virus had leaked into the city and all the townspeople had become Zombies.

• While engaging the Zombies, I met Claire Redfield. She was the sister of S.T.A.R.S. officer Chris Redfield. Afterwards we worked together to find a way to escape the city.

• In the police station, I discovered that the chief was complicit in efforts to cover-up the incident in the Arklay Mountains two months ago. It seems he also knew about the incident in advance.

• In the midst of my investigation, I arrived at an Umbrella laboratory. It was the heart of Umbrella's biological weapons research. In the lab, I confirmed the existence of the new "G-Virus" as a replacement to the T-Virus. It is a terrifying thing that alters DNA and drastically transforms the form and capabilities of the human body.

• Also in that place, I encountered Dr. William, creator of the T and G viruses. His humanity had already left his body and he was transformed into "G" with unprecedented strength and brutality, but with Claire Redfield's help, we succeeded in escaping the city by destroying "G."

• However, the situation has only reached a temporary conclusion. I cannot close the book on this report until disclosure of the true face of Umbrella, the main culprit in a series of incidents. 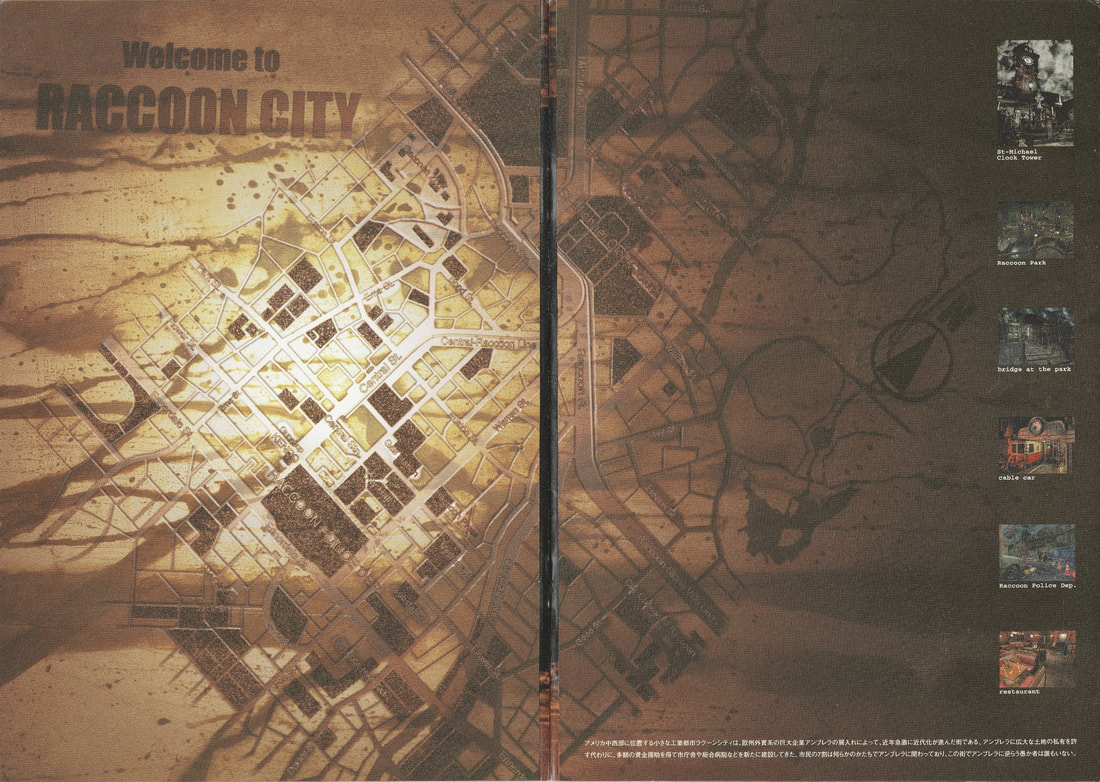 PAGE 3
With her flexibility and strength, she can grasp the path to survive.
Jill Valentine. An unforgettable name.
That unforgettably strong courage that never gives up hope, no matter the situation.
Two months have passed since the incident in the Arklay Mountains. In order to stop the nightmare from repeating itself, this incident must not end in vain. With that in mind, the surviving members of S.T.A.R.S. went to Europe to get to the bottom of the incident. But Jill, using that detail as cover, remains behind in Raccoon City to investigate Umbrella's activities. However unfortunately, terror creeps behind her once more...!
What does Jill see in this game of life-or-death survival that she is inevitably involved in?
The whole picture of the Raccoon City tragedy is finally revealed!
...Jill Valentine. Are you afraid to keep fighting to survive?
PAGE 06
FEAR'S CHASING YOU...

An evil gaze. The ultimate terror. Endless despair...
Umbrella has made a horrifying monster...!
The Pursuer "Nemesis-T Type" has been created.

A huge unstoppable monster. It has the intelligence to carry out orders no matter the situation.
The "Nemesis-T Type" is the "most deadly" enemy released by Umbrella, created by implanting the parasitic bioweapon "Nemesis (NE-α Type)" into an enhanced version of the Tyrant.
Nemesis is a malicious creation that has its own brain and even controls and uses the brain of the body it has attached itself to. Combat abilities, resistance, resilience... The Tyrant's physical capabilities have been greatly enhanced, and its dramatically increased intelligence has perfected its ability to carry out commands. If it is damaged, it will undergo repeated metamorphosis depending on the degree of damage, and its appearance will change form into a horrifying monster with unprecedented ferocity and intelligence.
For it, there is nothing that can be called an obstacle.
And all that unbelievable power is directed toward eliminating S.T.A.R.S.
All it seeks is "death," to crush any hopes of survival.
It will never cease its pursuit until it twists, crushes, and destroys the target. Once again, a nightmare with no way out begins...!
PAGE 08
Raccoon City is a small industrial city located in the Midwestern United States, a city that has undergone rapid modernization in recent years thanks to the support of Umbrella, a foreign European giant company. In exchange for allowing Umbrella to privately own vast tracts of land, the city has received a large amount of financial assistance to build a new city hall, a general hospital, and other facilities. 70% of the city's citizens are involved with Umbrella in one way or another, and no one in this city is foolish enough to go against Umbrella.
PAGE 13
NEWCOMER

Carlos Oliveira (21)
A rookie soldier in the Umbrella Biohazard Countermeasures Service (UBCS). He is from South America.
He may not look like much, but he is compassionate and has a strong sense of responsibility.
He was once a member of a communist guerrilla group that was in collusion with criminal organizations, but was found by Umbrella and became a mercenary.
During his battle with Zombies in Raccoon City, he meets Jill and grows as a soldier and a human being.

Nikolai Zinoviev (35)
A soldier belonging to the Umbrella Biohazard Countermeasure Service (UBCS). Born in Russia. A calm and collected professional. He sometimes displays a ruthless side.

Mikhail Victor (45)
A platoon leader in the Umbrella Biohazard Countermeasure Service (UBCS). Born in Russia. He has a wealth of battle experience and leadership skills, and is well-liked by his subordinates.