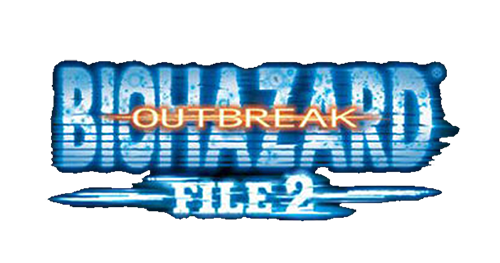 BIOHAZARD OUTBREAK FILE 2 (Resident Evil Outbreak File 2) was the second installment in the online series, and finally all regions of the world had the ability to play online. Outbreak File 2 features the same characters from the first entry, but with 5 new locations still within Raccoon City. Outbreak File 2 did not really build upon the first game as such, as this is really an expansion to the stories seen in Outbreak. However some additions were included such as quicker load times and the ability to shoot and walk at the same time. A first for the Resident Evil series.
Production Information

The game takes place alongside the first, and expands on the mythos of the Resident Evil universe while giving players more glimpses of Raccoon City.

As can be deduced by the name of the game, Outbreak File #2 is not actually an entirely new game. The scenarios featured in the game were actually created for the first Outbreak. Despite this, the game did add significant gameplay improvements among others.

Wild Things
As the same suggests, Wild Things places the survivors in possibly the most dangerous location in Raccoon City, Raccoon Zoo. Many of the attracts including Lions, Hyena's and various plants have felt the full force of the T-virus which present a sustained and menacing threat. The Zoo's star attraction, Oscar the elephant has also been infected and tramples through the Zoo on a regular basis.

Underbelly
A dark and brooding chapter set in the metro network of Raccoon City. In his day job, Jim Chapman works for the subway system, but soon after the viral leak, many infected fleas began feeding on any prey they can find.

Flashback
In a throwback to the original game, the game's survivors find themselves on the outskirts of the city in the Arklay Forest. Here they encounter Al Lester who entices them into an abandoned hospital overran by plant life. As soon as the survivor's enter the hospital, they are tracked by Axe Man until a climatic showdown with Dorothy Lester in the basement.

Desperate Times
Desperate Times shows for the first time the zombie onslaught that was documented in Resident Evil 2. Meeting with Marvin Branagh the survivors take shelter in the R.P.D. before defending the precinct against the undead.

End of the Road
Running side by side to Decisions, Decisions from Resident Evil: Outbreak End of the Road shows a different group of survivors that have fled to an Umbrella facility in the city. Employee Carter assists as the survivors battle through the facility before returning to the city streets. It is a race against time before the city is bombarded and destroyed.