With some in-depth research on development, concept artists, distinctive handwriting tells, and of course my trusty magnifying glass, I’ve managed to identify the games the cut monster designs listed in Biohazard Archives were intended for. On top of that, I also translated all the concept art notes that were legible.

There is only a single artwork that belongs to this game, and it is: 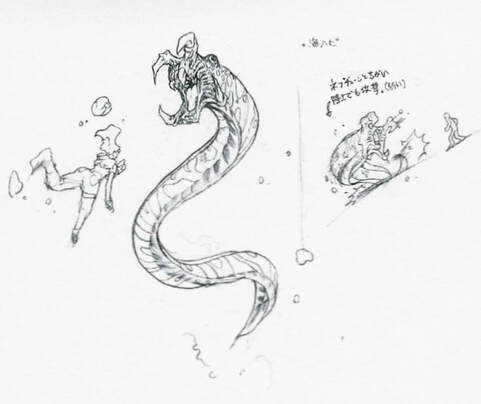 Different to Neptune, and will attack on land as well (weak).

Starting with designs originally intended for “1.5.” 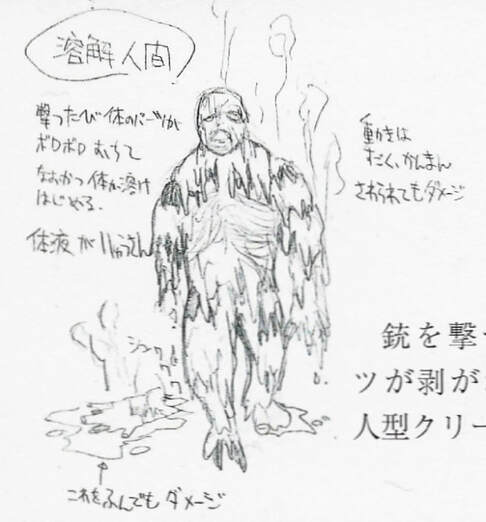 Each time it’s shot, parts of it fall off in pieces, on top of that, the liquid dissolved from its body is acidic.

Its movement is really sluggish. It causes damage even if touched.

[pointing at the puddle] It causes damage if stepped into.

A bright red “howl sac.” When the monkey howls, it grows in size.

Monkey A (back) [top right]

Chrysalidisation
The entire surface of its back encloses the spine at the center in chrysalid. Its colour is like that of a pupa. 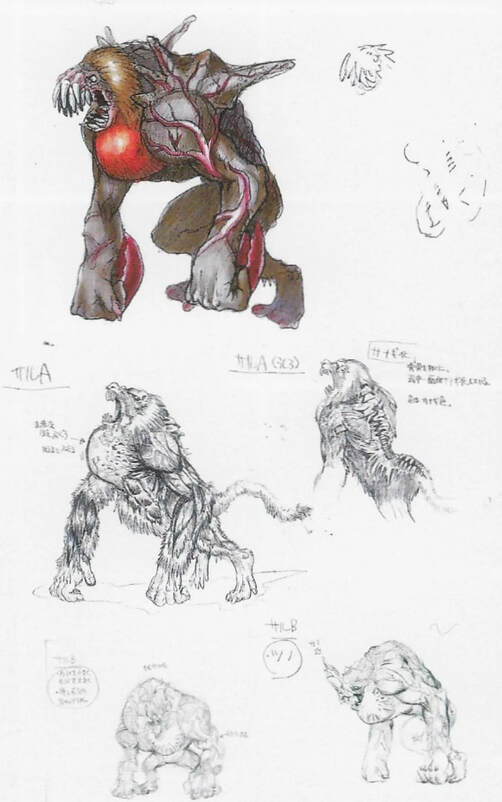 Make one of the arms bigger, and one smaller
[rest is illegible]

[pointing at the drawing] horn 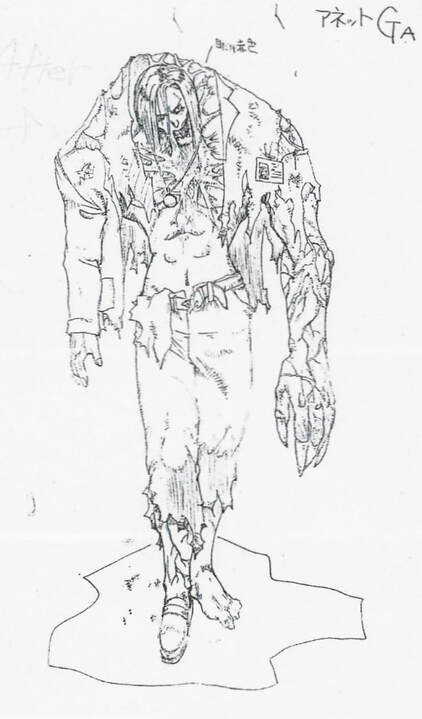 Only the eyes are red. 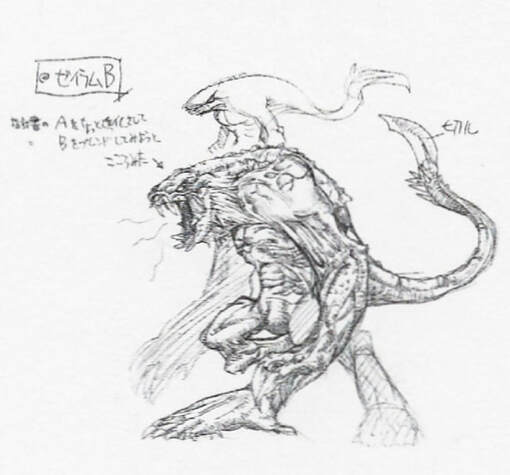 Further developing “A” from the proposal document, I tried to see what happened if I blended it with “B” from the same doc.

[pointing at the tail] Cuts

[pointing at the mouth] Huge mouth

[little drawing] *bites*
“Ouch!”
A mouth into which a human’s head easily fits

A cocoon covers its entire body. “A” goes with a “caterpillar” look, “B” is more like a “pulsating pupa.” Wonder what colour it should be.

Swellings starting from the wrist. That’s where the claws end. They grow large and sharp.

A lot more muscular than “A.” 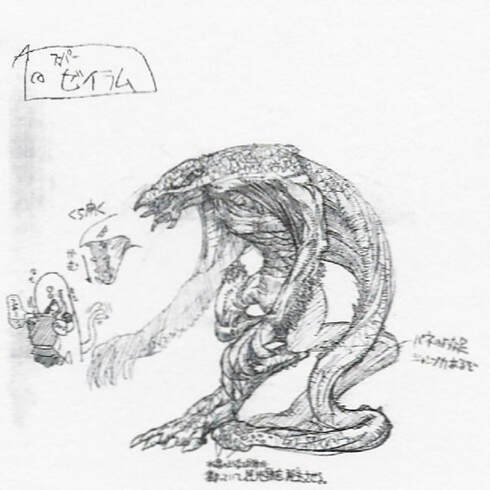 [right note] Legs are like springs. Has great jumping power.

[bottom note] Having accumulated a crystal-like substance, it allows it to generate a strong beam of light. 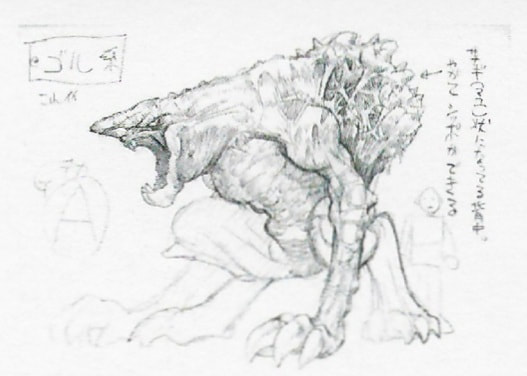 G-minion A
Its back takes the appearance of a chrysalid (cocoon). Soon, it will grow into a tail. 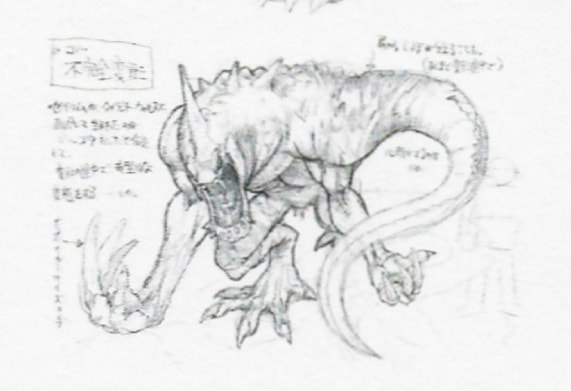 Assuming that Golgotha was born from Zeiram getting infected by the T-virus, halfway through transformation this freak mutation occurs… or something like that.

The right claws are a different size. [partially legible]

Tail grows from the shoulder as well (during mutation). [partially legible] 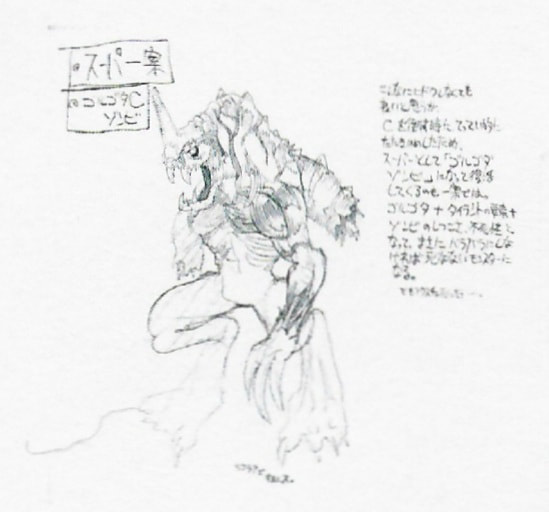 It’s fine by me if it isn’t this horrific, but once “C” is defeated, in one idea, where it resurrects and becomes a “Golgotha zombie” as its super form—due to being utterly demolished, it won’t die unless completely torn into pieces as it turns into a monster that’s a combination of Golgotha, elements of the Tyrant, and the persistence and immortality of zombies.

[rest is not completely legible]

Its back becomes filled with spikes (horns).

[pointing at the tail] Wesker (or Nicholas)

It may be a good idea to very clearly have areas of damage from the previous (Golgotha C) fight (like a missing arm).

Its Super (ultimate) is to continue powering up through repeated transformations, and it aims for reaching the very limit of its body’s power level (think of Goku from Dragon Ball using Kaio-ken x10 or x20).
Even though its body is on the brink of collapse, its power and aggression dramatically increases to much higher levels than what “C” or anything else had.

Gives off the sense of a final stand at the brink of death.


The following designs were suggested after development restarted for Bio2: 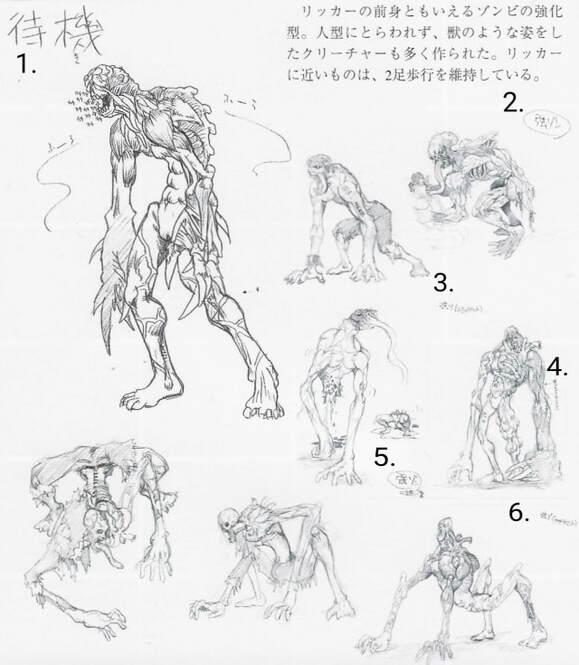 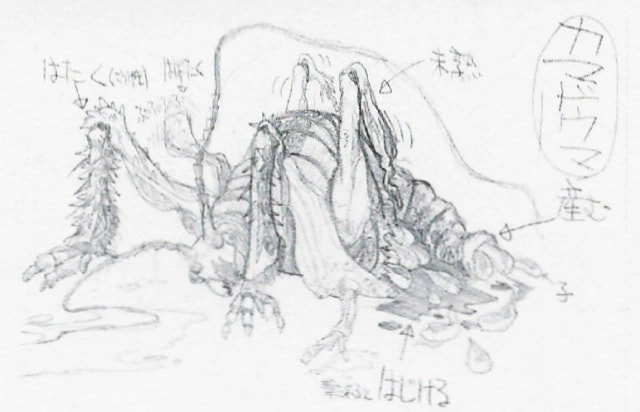 If attacked, these break open 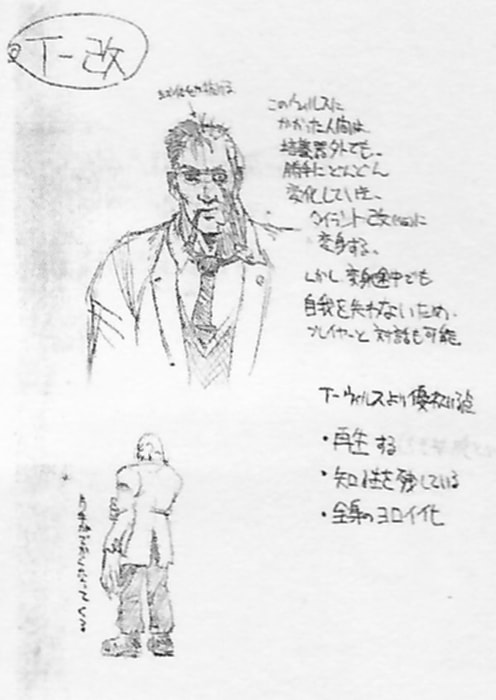 People infected by this virus will be rapidly mutating by their own will even outside an incubation tube, and transform into a “Tyrant advanced.” Since they don’t lose themselves, there could be a story where they face off against the player.

Points where it surpasses the T-virus:
Regeneration
Retention of intelligence
The entire body turns into an armour 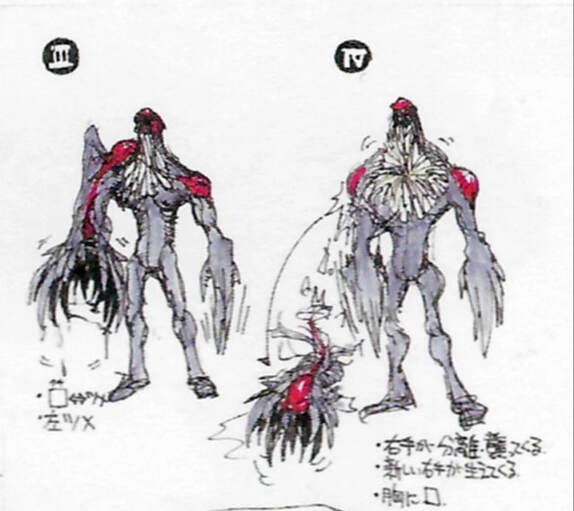 [IV] Right hand detaches and comes back attacking.
A new hand grows in its place.
Chest becomes a mouth. 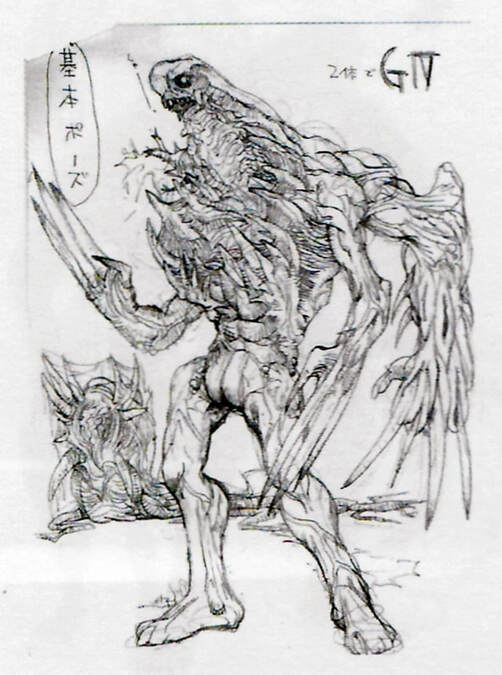 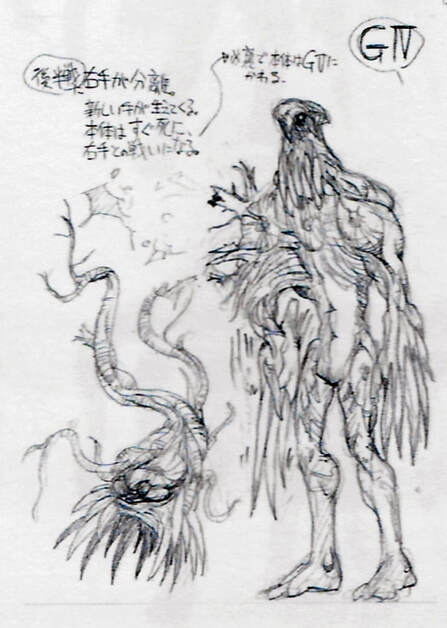 Second half of the battle
Right hand detaches.
A new hand grows in its place.
The main body immediately dies, and now it’s a fight against the right arm.→In the “B” scenario, the main body transforms into GV. 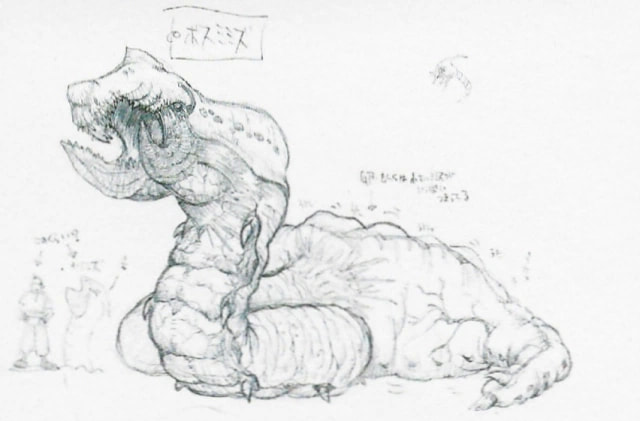 [little drawing in the left corner] small worm
about this tall 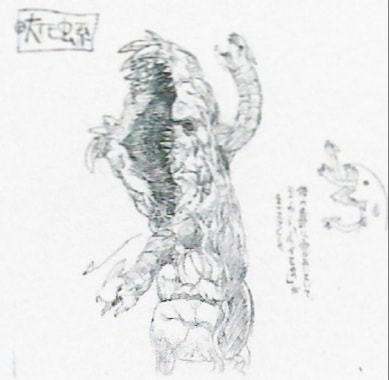 Small worms pop out from the holes in its body. [partially legible]

Retail Bio3, possibly suggested during its early days (1.9 or before – RC minigame setting). 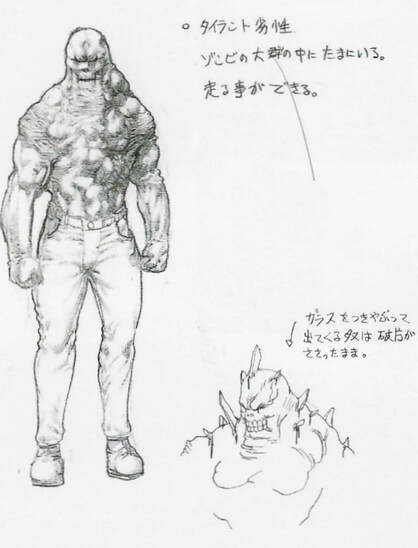 Sometimes appears in large crowds of zombies. It can run.

Smashing through glass, he has shards of glass stuck in him coming through. 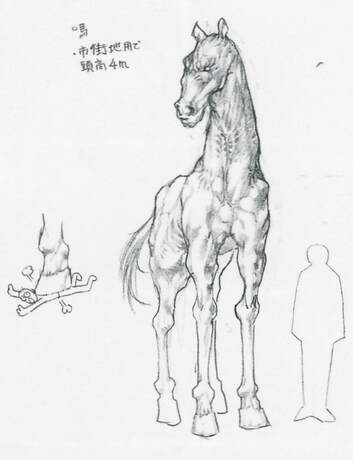 For urban use
4 metres tall 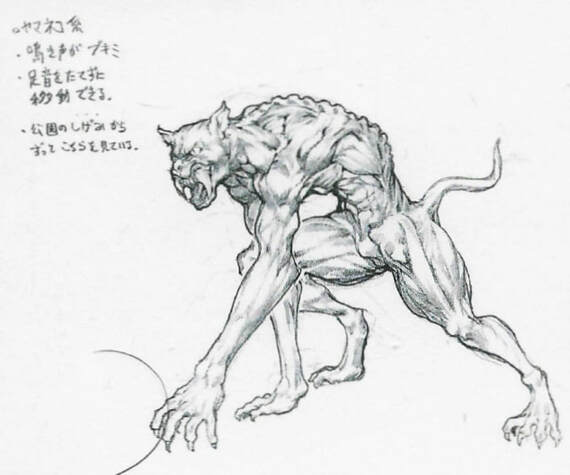 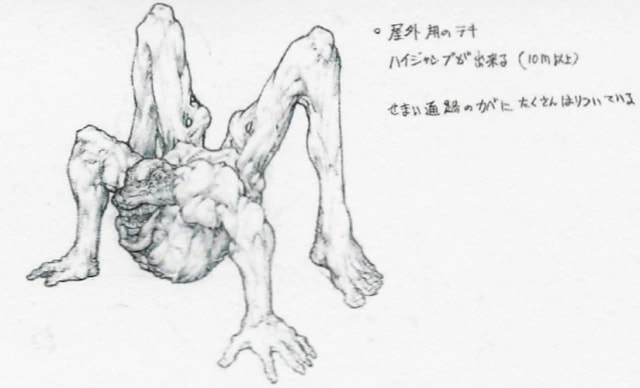 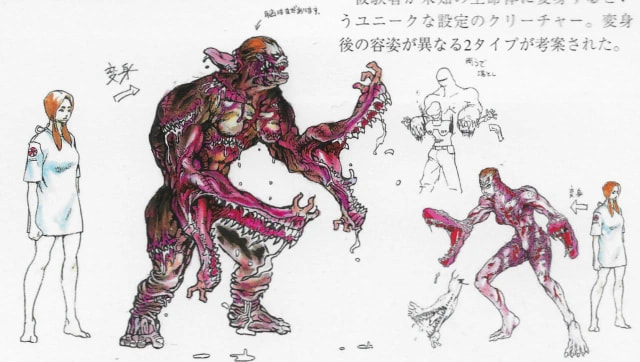 It still has a brain.
Both arms fall off.

Please keep in mind that the editors of Archives misidentified a lot of these artworks. This research is entirely based on the artworks and their notes, and may disregard the opinion of those who compiled the book.
Scans by: NewsBot (thank you)