Developed by Capcom for Japan only in 2004, this mobile phone game was released on DoCoMo and AU devices respectively. Price of the game was set at 315 Yen per month. The game had two different modes "Stories" a collection of 15 scenarios of which when completing each mission you will unlock a new scenario using the points you gained in order to progress and it also featured a "Situations" mode, the aim of the second mode was to rescue and acquire ammunition. Total gameplay time to clear all modes was said to have been around 8 hours to complete, all which fit seamlessly into the Biohazard universe. The games style is closer to the original titles of the series such as the PlayStation 1 era titles. The game utilizes fixed third person camera angles the same as said originals which switch position as you venture forward. When an enemy appears you use the left button on the mobile device to fire and eliminate the threat. Quality is said to be only slightly grainier than the PS1 titles, the frame rate is around 25 fps on a standard mobile device. 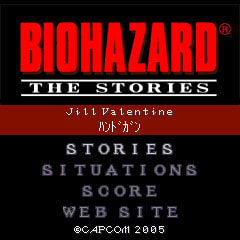 "Story's mode" is where you can enjoy the mystery and action by downloading scenarios, and "Situations mode" where you can easily enjoy short missions at any time. Shake up the fear in your hands with two modes!
Sources:
Gamespot Impressions