Biohazard 7 Walkthrough The Fear opened its doors for the first time on October 26th 2019 (25th for Preview Event). The attraction is located at The Plaza Capcom Ikebukuro store VR-X booth, Tokyo Japan (same place as Valiant Raid). Opening times from 10am-10pm. Walkthrough The Fear was produced & developed by Dynamo Pictures along with ZOTAC co-producing and Capcom supervising. Dynamo Pictures were also involved with development and planning for Valiant Raid and motion capture for Biohazard Infinite Darkness. The VR horror  attraction is free-roam game set in the Baker plantation from Biohazard 7 it begins like an escape game however devolves into a shooter.

Walkthrough the Fear’s story plays out as a Biohazard 7 prequel involving the kidnapped victims of the Bakers. The player portrays one of the victims trying to escape the Baker’s home. The attraction had a play area of 450 square meters for players to move around in. The whole experience including introduction lasted around 35 minutes (around 10-15 for actual gameplay). The attraction cost 2800 yen per person and required 4 players at all times, if you cannot organise a group of four you will be asked to play with other groups. 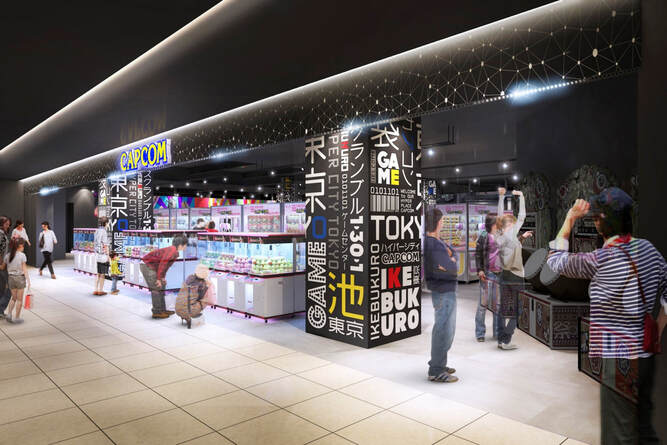 Credit to BiohazardFrance for uploading trailer 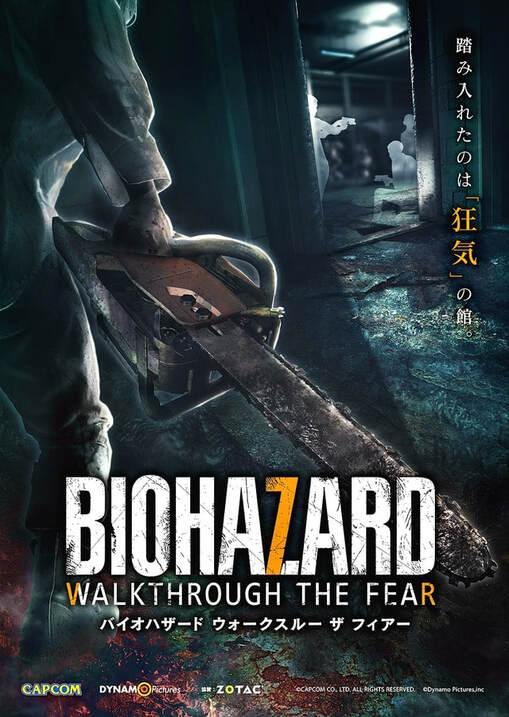 Poster tagline translated by Nora "What you've just walked into is a madhouse". A Probable refference to the highest difficulty mode in Resident Evil 7.
Experience number of people: 2 to 4 players

A vast play area of 450 square meters of play field.

The fear that awaits...

Can you survive this despair with your friends!?

Players visiting Louisiana in the middle of several disapperance reports, for unknown reasons people are suddenly attacked by someone and knocked unconcious. When awakening, they are trapped in the basement of a large mansion!

The owner of the mansion is Jack Baker. Is this who kidnapped the players?

Fortunately, the players have found a gun and those who find themselves in the same situation will try to escape together.

The game was developed by Zotac and used the ZOTAC's backpack PC "VR GO 2.0". 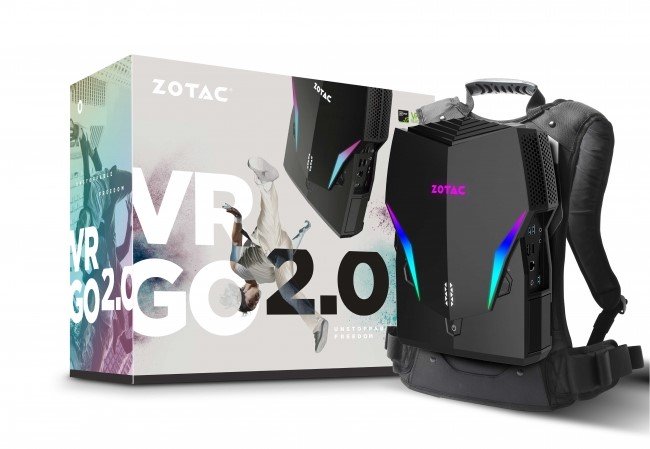 Information on the ZOTAC VR GO 2.0

The VR G0 2.0 new technology on the market, it’s purpose is to provide Virtual Reality on the go, hence the name. The VR equipment is all fitted into a backpack that can be worn allowing you to move around with ease, perfect for VR attraction based games. The set comes with a built-in power supply freeing up any restrictions of cables and has its own video output slots. The battery pack when fully charged can last more than 1.5 hours of playtime. The battery can even be swapped out and replaced with a newly charged battery without having to end your game. Battery life is indicated on the unit allowing you to see the batteries remaining charge.

The GO 2.0 is equipped with an Intel 8th Generation Core i7 processor and a NVIDIA GeForce GTX 1070 graphics card.

Handed out during the introduction explained further below (Walkthrough section) these profile sheets introduce us to each of the five characters who have been kidnapped. One NPC and four playable characters. The profiles are written in-universe by the Dulvey Police Department and are “Missing Person” reports released to the public in hopes of anyone having information regarding their whereabouts.

Below are transcriptions (grammar errors included) I have created from photos of these cards, some text is missing due to the photo or the layout of the profile sheet so when words cannot be seen I have inserted *illegible* in its place. 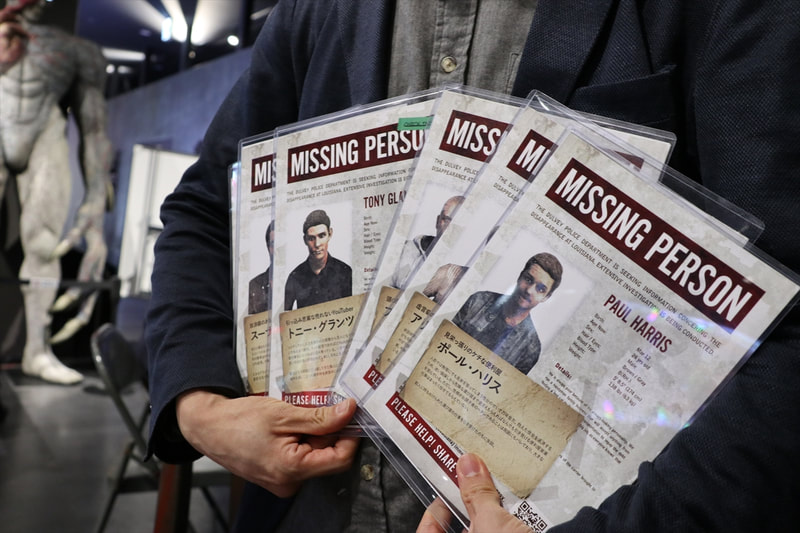 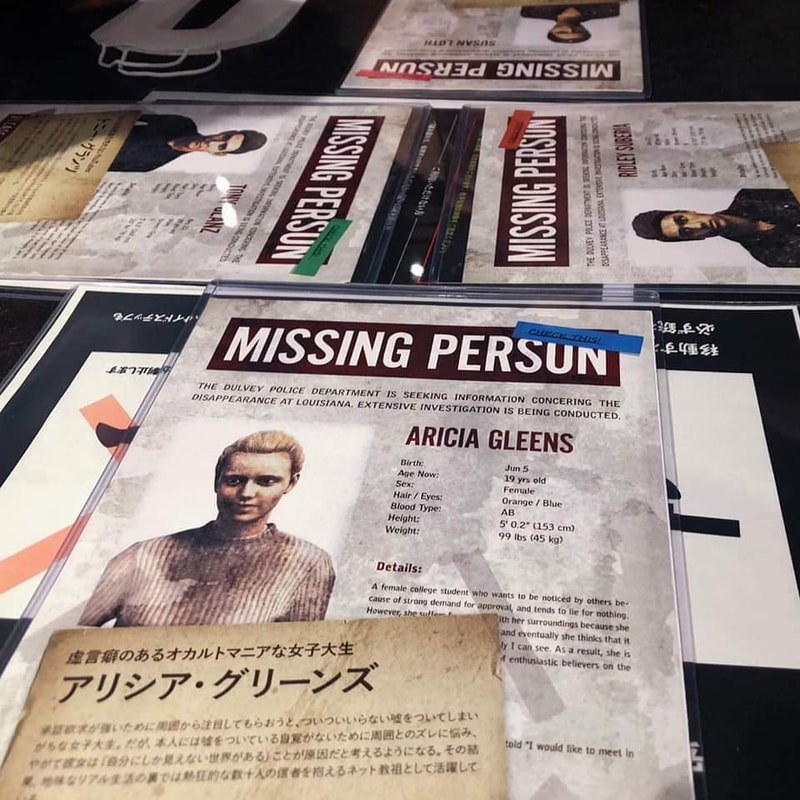 Details: He is always poor because of his always-looking personality. We run a handyman family buisness that will accept anything from finding a lost cat * illegible* transportation to repay the debt *illegible* big job; as everyone knows that *illegible*.

Details: A female college student who wants to be noticed by others because of strong demand for approval, and tends to lie for nothing. However she suffers *illegible* her surroundings because she *illegible*and eventually she thinks that it *illegible* I can see. As a result, she is *illegible* enthusiastic belivers on the *illegible*.

Details: He wants to become an entertainer from the experience of being saved a life by comedians, but he gets stuck because of his withdrawn personality. If *illegible* internet, you’ll start YouTuber *illegible* grow and you’re insanely busy *illegible* and, the work of a pet food tast-…*illegible* as it is thought *illegible* and it would be ideal.

Details: She takes any defense request if the other party pays the money and makes it successful. However, if she loses interest in the client herself, she will soon *illegible* …omadic journey. The victory rate *illegible* end is 98%, but in most cases, *illegible* …0% because you willdecline on *illegible* …ests as the client’s claims are *illegible*.

Details: *illegible* Note: Can see the words “biologist” and “creatures” in there.

(Massive thanks and credit to shouTAKUMA who I spoke with and gave us the details of their playthrough and images for us to see.)

And credit to Inside-Games.jp for their article which also had some details.

Upon entering the attraction you are sat around a table and given an introduction that briefly explains the VR game. 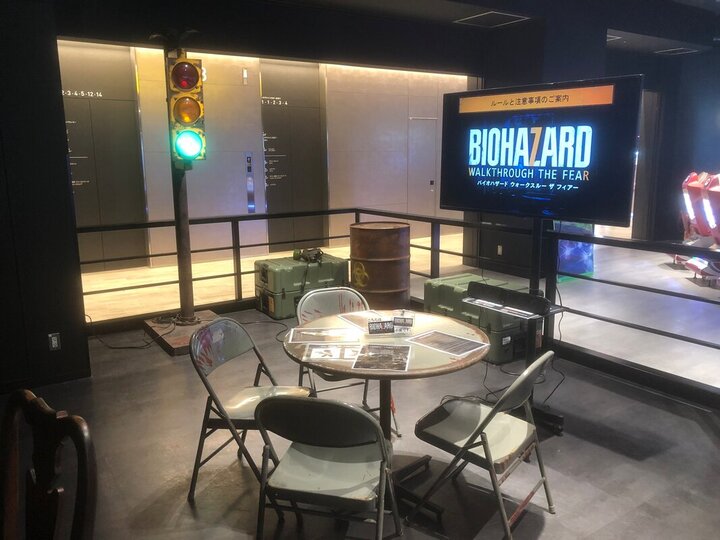 During the introduction you are shown a CG in-universe video with Paul Harris (voiced by Shinya Nishiyama), unknown what Paul tells you but likely establishing the plot that is to follow. The video can be briefly seen here at 4 minutes 39 seconds.

After the introduction you are handed a character profile sheet which will be your character to control. Each character sheet has a different color assignment, red, blue, pink and green. The color you are assigned is individual to each player and when ammunition is dropped in the game you can only pick up the same kind as the color you were given with your character.
Then you are guided into a large empty room and given the VR equipment including the ZOTAC back pack, VR headset, headphones and a gun controller. 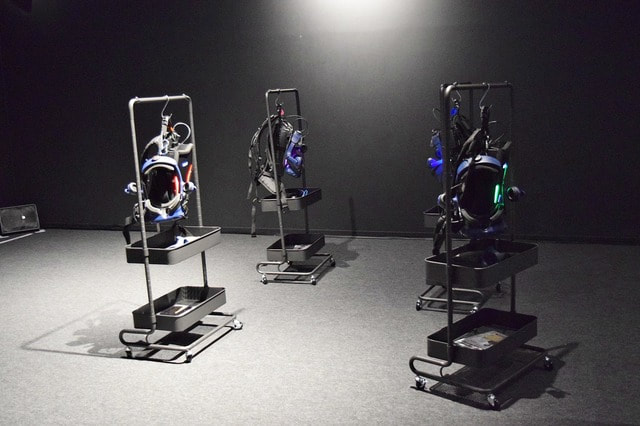 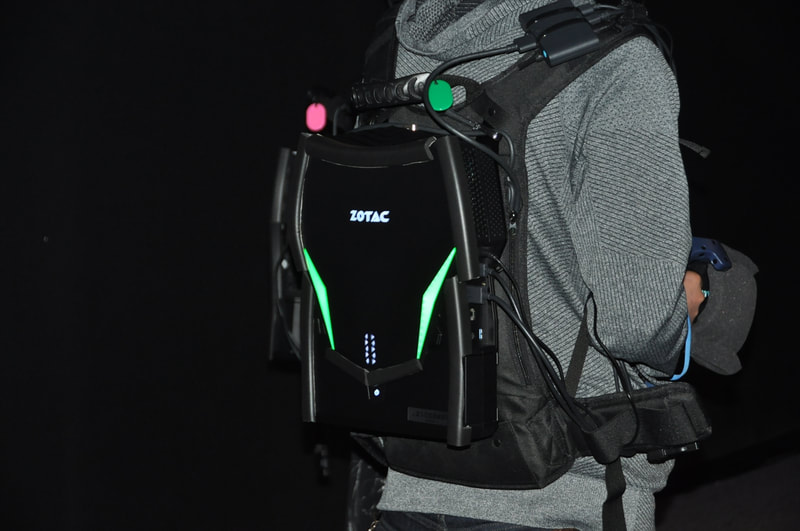 Once the headset is fixed you will find yourself inside the underground area of the Baker home. 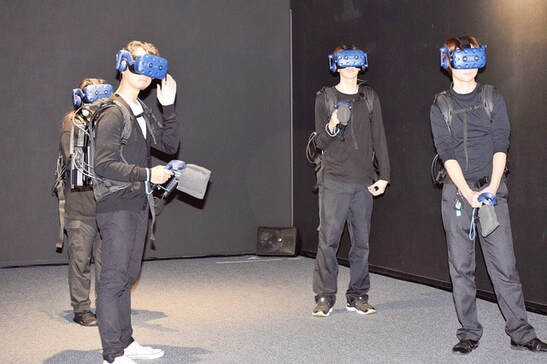 As mentioned already you were attacked and knocked unconscious and now you awake in the basement. When glancing around the area you will see a nearby gurney with blood stains upon and an NPC stood next to it. 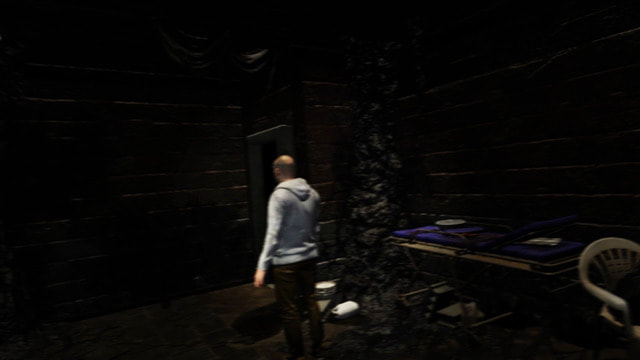 You have a brief chance to look around the room however eventually Jack Baker enters the room. 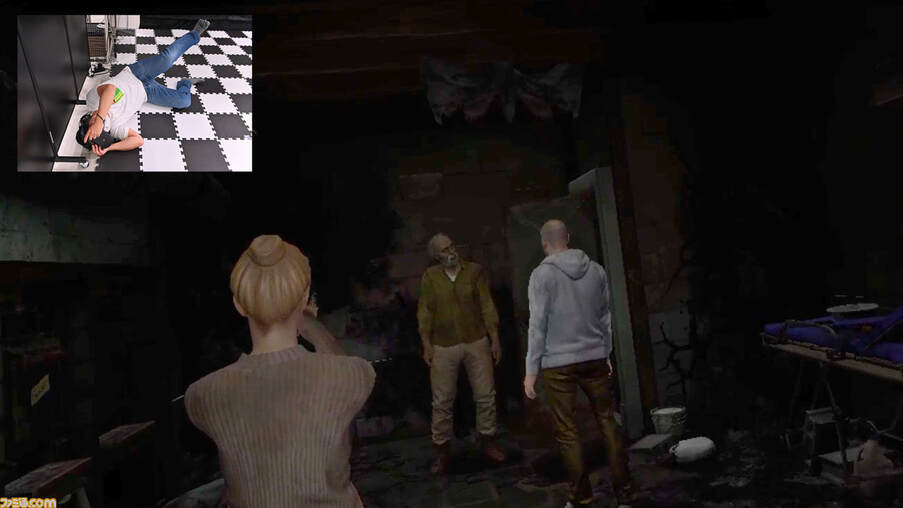 Jack and the NPC have an interaction and Jack kills him.

The NPC falls dead at your feet and Jack leaves the room, now you must explore the room to find an exit. After searching the room you come across a Beretta and some limited ammunition. There is another NPC inside the room Paul Harris (from the introduction video) he will be your guide throughout the game and give hints regarding what you must do to escape. Following Paul you find a passage and as you begin heading through there mold begins growing on the walls. Looking down you will see molded spawning in from the floor. Opening fire on the molded eventually you kill them all and continue forward until you find yourself inside a small room with a back door. 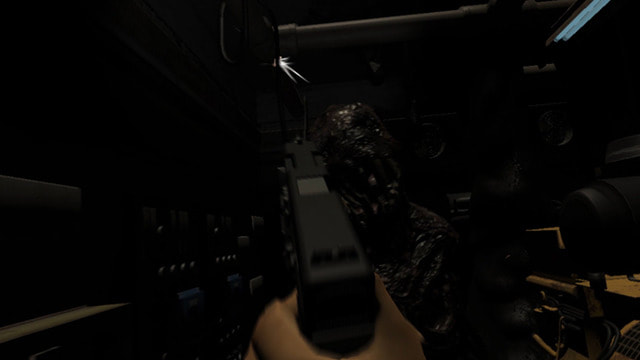 Approaching the door spawns in another molded under your feet and another spawns soon after. You could find ammunition inside this room and use it to defeat the molded, upon doing so the back door is opened.

The back door leads to the elevator hallway, pressing the call button brings Jack into the room via the same door you came through. Jack begins attacking you with chainsaw in hand. 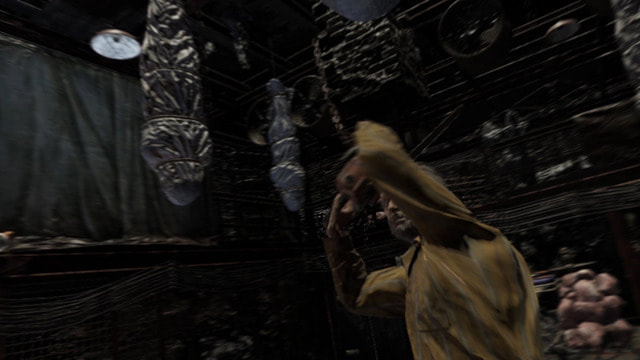 You must avoid his attacks while collecting ammunition and firing at him. Eventually after enough damage Jack’s chainsaw explodes and he falls down as the elevator arrives. You ride the elevator to the ground floor and enter a room with a metal bar blocking a door. When you try to interact with it Jack engulfed in flames comes out of the elevator.

A second battle begins. Events from here become unclear as most players could not finish this battle. Firing infinite bullets into Jack like the previous attack doesn’t seem to do anything and eventually your eyesight begins to fade as the timer expires. No reports of anyone finishing Walkthrough the Fear so unable to elaborate any further.