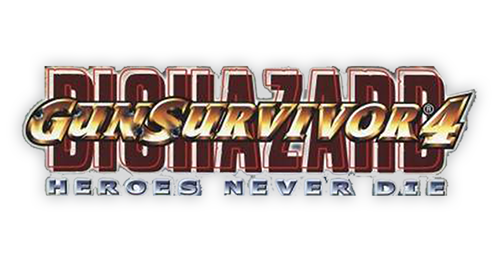 GUN SURVIVOR 4 BIOHAZARD HEROES NEVER DIE (RESIDENT EVIL DEAD AIM) is the third GUN SURVIVOR entry in the series. GS4 restores the third-person perspective but switches to first-person upon aiming. It was developed by CAPCOM Production Studio 3 like the other GUN SURVIVOR games and was released exclusively for the PlayStation 2 as the company's then-effective exclusivity contract with Nintendo pertained only to numbered entries in the series.
Production Information

With the Umbrella Corporation bankrupt in North America, the branches outside the U.S. and dummy companies belonging to the once international organization continued operation. At some point following the Raccoon City incident, the G-virus which had been seized from William Birkin in 1998 was used by the company's France branch in order to infuse it with the stable t-virus and its anti-bodies to create electrical properties, producing an indestructible B.O.W. Umbrella continued with its illegal bioweapons trade by covertly selling their products to the highest bidders.

In 2002 the CEO of Umbrella Corporation, Ozwell E. Spencer, organized a secret auction of the company's latest bioweapons on the company's luxury cruise liner, the Spencer Rain, in order to procure funds for the revival of the company. In September, the cruise liner was sea-jacked by a terrorist group led by an ex-Umbrella employee named Morpheus D. Duvall, who had stolen three samples of the t-virus from an agent safe used to store trial products in the Paris Laboratory three days prior to the sea-jacking. Among these samples was the newly refined agent V.0.9.2. of the t+G-virus. Morpheus demands $5 billion each from the United States and China and threatens to launch missiles loaded with the t-virus at the two superpowers if they refuse.

In order to stop the bioterrorism being carried out by Morpheus, the United States Strategic Command sends a spy named Bruce McGivern, a member of the Anti-Umbrella Pursuit and Investigation Team, to stop him. Meanwhile the Chinese Ministry of State Security sends their own spy, named Fong Ling. The two arrive on the ship filled with monsters, and are forced to work together despite their differing allegiances.